The Germans always seem to know how to do things right. From automobile engineering and financial banking right through to beer and festivals, the Germans have always been a step ahead. Looking from a musical angle, again it’s no different. Not only making landmarks with extreme precision in futuristic left-field techno and statements of grand beauty in classical musicianship, they’ve also been pioneers in exploring fluidity and pure organic creativity in the jam-filled krautrock genre. And if it’s game-changing psychedelic jam sessions you’re looking for, then look no further than Cologne based band Can. Standing among peers such as Faust and Neu!, Can took time to release a string of prolific records in the early 1970s that resonated deeply with a wide audience for years to come.

Ask a group of fans what their favourite Can release and there is the very likely chance they will all reply with different answers. They’d all be right to some extent. There’s a lot to celebrate within Can’s widely imaginative discography and I myself sometimes question what my favourite Can album is. Nevertheless, the one I keep coming back to the most is the undoubtedly legendary 1971 explosion, Tago Mago, which features the most revered lineup in the bands lucrative history. Influential to almost everything that came after, Tago Mago is so undeniably groovy and psychedelic that at times it’s scary. It’s measured insanity projected onto wax in the double album format.

Here, at the height of their experimentation, strange ideas are seemingly pulled out of nothing into fruition. Ideas that would normally ruin a song and sabotage any sense of cohesion continually pop up. Just what the hell is the weird jazz lounge piano that lasts for all of 20 seconds toward the start of Halleluwah? And why do the vocals at the start of Oh Yeah sound like the weird backwards talking from the cult TV show Twin Peaks? Chuck in a few dog barking samples into the already very weird Aumgn and I guess you’ve got yourself a song. While Can offer no such tangible answers to these musical decisions, the execution simply just fits.

While there’s no mistaking that yes, Tago Mago is an experimental piece of rock music, it isn’t completely inaccessible by any means. Paperhouse and Oh Yeah tease every sense with their energetic, rainbow-filled explorations of groove that will shake even the most hesitant of listeners. The ecstatic guitar/keyboard combination keeps rising to new heights as Damo Suzuki bursts with liveliness in his vocal performance. Mushroom retains the era’s classic psychedelic sound while on Halleluwah, the tugging bass lines drive the song forward for an entrancing, deserved 18 minute runtime. Tying everything together are the consistently fantastic drum fills which sound so full, funky and inventive that it’s hard to believe there’s only one drummer in the band.

The second half of the album is where things become unmistakably weird, perhaps the product of some of the band’s LSD-fuelled adventures. Aumgn indeed sounds like the journey through some offhand spacey trip, fleeting passages of violin, whistles and echoey vocals coming and going at will. Peking O on the other hand, could easily be mistaken for a weird electronic hit. This is of course, in an alternate universe where using way-too-fast drum patterns and screaming at the top of your lungs in the midst of improvised keyboard playing is considered mainstream. It’s no surprise then that live and alternate recordings of the songs on Tago Mago are regularly so different that they’re virtually unrecognisable. In fact, they’re often even better than the wonderful studio recordings found here. 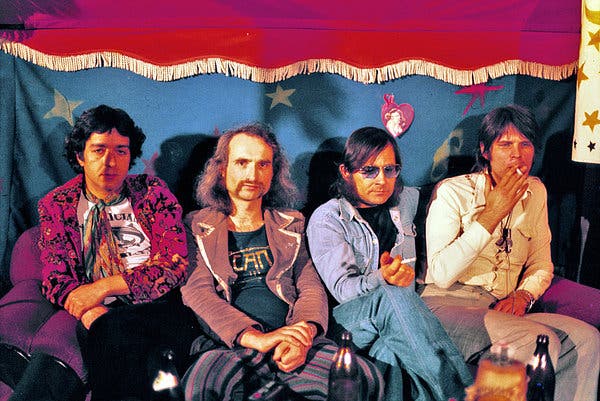 It’s the calm fusion of the unique experimentation and the infinitely pleasuring grooves that makes Tago Mago such an enduring record. Without each other, the two halves would merely be fantastic, but together they’re quite transcendent. Lesser musicians would struggle for years down the track to match the pure unbridled fun that Can clearly have on this record. A perfect example of how hypnotic repetition and a bunch of mad Germans rocking out can lead to something great, Tago Mago still and always will inspire anyone who has the patience to sink deep into its funky rhythms.