As bittersweet as realising you’ve spelt her last name incorrectly for about the 15th time, Haley Heynderickx’s debut is as hopeful as it is inwardly existential. I Need to Start a Garden is driven by her confidently soft voice and peculiar guitar passages fraught with techniques that entwine traditional American primitivism, signaling an impressive sense of musical maturity despite this only being the beginning. With what is on display on Heynderickx’s first 31 minute LP outing, it’s difficult to be anything other than excitedly curious with what lies ahead.

I Need to Start a Garden is a fairly barebones affair with her lyrical content and guitar taking the front seat throughout. Although the supplementary drums, warm brass and lo-fi piano adds to the experience as a whole, she is individually very strong, with the brief but harrowing opener “No Face” and the uncertain “Jo” being testaments to that. It’s interesting to imagine an even more personal release with Heynderickx touching on the “me and my guitar” trope of contemporaries Mark Kozelek and Phil Elverum, as I honestly think it would work beautifully.

An overarching theme of self-questioning instills itself within the lingering melancholy of the first few tracks, seeping into the fingerpicking and her mellow analogies. On “Bug Collector” she tangles accounts of her run-ins against various insects, “fuckers” as they’re lovingly named, metaphorically detailing the tidbits that undermine those moments that should be special. “No Face” sees her ask what parts of her brought her down;

Is it the bridge of my nose

Or the backs of my skin

Is it the pull of my hips

That you couldn’t let in?”

Almost eight-minute centrepiece “Worth It” breaks away from the soft, slow wallowing with newfound energy, now allowing for louder wallowing with a small band accompaniment messing with an interesting song structure and bridging the gap between folk and touches of psych. Certain passages of this remind me distinctly of Aussie rockers Psychedelic Porn Crumpets with their hazy psych atmosphere and blend phenomenally well with her stronger vocals. The twinkled, moody piano of following track, “Show You a Body”, that evolves with field recordings and climactic vocal repetition just adds to the strength of Heynderickx’s songwriting. These types of smothering and emotive soundscapes are not something you regularly see on a debut album. 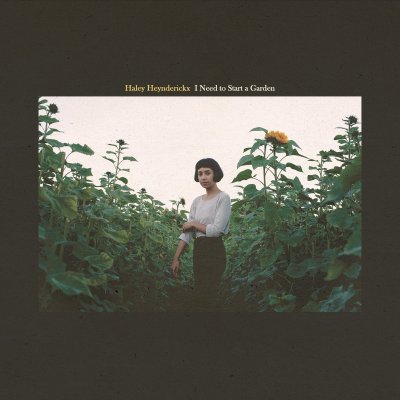 However, Heynderickx falters slightly as she dares to fall into more cliche singer/songwriter and indie folk potholes like on “Oom Sha La La” where almost cheesy instrumental and vocal patterns work to undermine what would be a definite highlight on the record as she builds to a remarkable yell, her voice cracking and breaking with emotion. I guess this is more disappointing considering the rest of the album shows how good she really can be, but is a reminder that, again, this is merely the beginning for Haley Heynderickx.

I Need to Start a Garden is otherwise everything you could ask for in a debut record, especially one that enters a modern cesspool of derivative singer/songwriters. It’s not too cute and doesn’t hesitate to be frank with emotions, letting her quotable thoughts be what she paints her idiosyncratic soundscapes with. Heynderickx knack for storytelling, composing structures that generally break away from the norm and employing timeless playing techniques alongside her unique vocal timbre are all reasons why this record is so powerful and insists that she’ll be one to watch into the future.